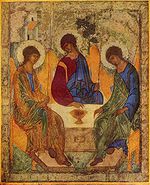 The Orthodox Church as a whole is the unity of what are called local autocephalous or autonomous churches. These words mean simply that these churches govern themselves, electing their own bishops and organizing their own lives. Each of these churches has exactly the same doctrine, discipline and spiritual practices.

They use the same Bible, follow the same canon laws, confess the authority of the same Church Councils and worship by what is essentially the same liturgy.
It is nothing other than this communion in faith and practice which unites all Orthodox Churches together into one world-wide body. In this sense, there is no one dominating authority in the Orthodox Church, no particular bishop or see or document which hasy over the churches.

In practice, the Church of Constantinople has functioned for centuries as the church responsible for guiding and preserving the worldwide unity of the family of self-governing Orthodox Churches. But it must be noticed that this responsibility is merely a practical and pastoral one.
It carries no sacramental or juridical power with it and it is possible that in the future this function may pass to some other church.

Orthodoxy is the beliefs and practices of the Eastern Orthodox Church. The word “Orthodox” comes from Greek, and it can mean either true teaching or true glory. A teaching that is orthodox is genuine. When written with a capital letter, it can designate the eastern churches after the split between Rome and Constantinople in AD 1054.
In 1054, the communion of churches that did not follow the formal leadership of the Pope in Rome, but continued with each other under the less formal authority of the Patriarch in Constantinople. Eastern Orthodox is One of the major divisions within Christianity (the others being Roman Catholicism, Anglicanism and Protestantism). It consists of 15 autocephalous churches. Each is headed by a bishop; most are related to a specific country, as in Serbian, Russian and Greek Orthodox. Read more …

There are five Orthodox churches which, although functioning independently on a day-to-day basis, are canonically dependent on an autocephalous Orthodox church. In practice this means that the head of an autonomous church must be confirmed in office by the Holy Synod of its mother autocephalous church. The Orthodox churches of Finland and Estonia are dependent on the Ecumenical Patriarchate, and Mount Sinai is dependent on the Patriarchate of Jerusalem. In addition, the Moscow Patriarchate has granted autonomous status to its Orthodox daughter churches in Japan and China, but these actions have not been recognized by the Ecumenical Patriarchate.
These are churches which, because of special circumstances or political turmoil in their countries of origin, have been received under the canonical protection of the Ecumenical Patriarchate. The Patriarchate provides these churches with Holy Chrism and confirms the election of their bishops. The canonical status of each of the churches with Irregular status is questioned in some way by Orthodoxy as a whole. This is not to put them all on the same level, as some are considered simply uncanonical, while others are in full schism and out of communion with the Orthodox Church. Read more …

Type your query in the box below:

Orthodoxy in America has a complex history and a complicated present. Read more …

The art and architecture of the Orthodox Church came to maturity in the Christian Roman, or Byzantine, Read more …

The list of the Canonical Orthodox jurisdictions represented in North America:

– Romanian Orthodox Archdiocese in the Americas

– Bulgarian Eastern Orthodox Diocese of the USA, Canada, and Australia

Icon of the Day: