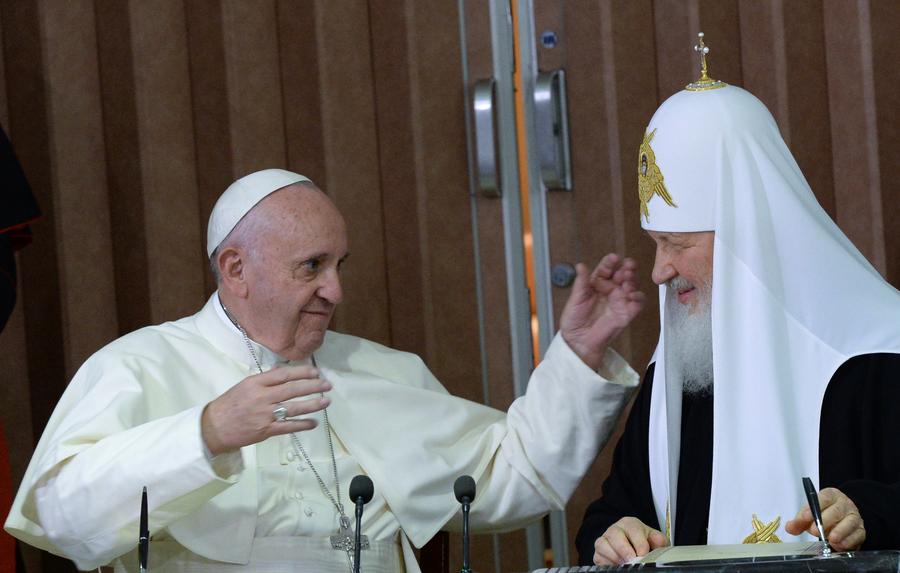 “The grace of the Lord Jesus Christ and the love of God the Father and the fellowship of the holy Spirit be with all of you” (2 Cor 13:13).

1. By God the Father’s will, from which all gifts come, in the name of our Lord Jesus Christ, and with the help of the Holy Spirit Consolator, we, Pope Francis and Kirill, Patriarch of Moscow and All Russia, have met today in Havana. We give thanks to God, glorified in the Trinity, for this meeting, the first in history.
It is with joy that we have met like brothers in the Christian faith who encounter one another “to speak face to face” (2 Jn 12), from heart to heart, to discuss the mutual relations between the Churches, the crucial problems of our faithful, and the outlook for the progress of human civilization.

2. Our fraternal meeting has taken place in Cuba, at the crossroads of North and South, East and West. It is from this island, the symbol of the hopes of the “New World” and the dramatic events of the history of the twentieth century, that we address our words to all the peoples of Latin America and of the other continents.
It is a source of joy that the Christian faith is growing here in a dynamic way. The powerful religious potential of Latin America, its centuries–old Christian tradition, grounded in the personal experience of millions of people, are the pledge of a great future for this region.
3. By meeting far from the longstanding disputes of the “Old World”, we experience with a particular sense of urgency the need for the shared labour of Catholics and Orthodox, who are called, with gentleness and respect, to give an explanation to the world of the hope in us (cf. 1 Pet3:15).
4. We thank God for the gifts received from the coming into the world of His only Son. We share the same spiritual Tradition of the first millennium of Christianity. The witnesses of this Tradition are the Most Holy Mother of God, the Virgin Mary, and the saints we venerate. Among them are innumerable martyrs who have given witness to their faithfulness to Christ and have become the “seed of Christians”.
5. Notwithstanding this shared Tradition of the first ten centuries, for nearly one thousand years Catholics and Orthodox have been deprived of communion in the Eucharist. We have been divided by wounds caused by old and recent conflicts, by differences inherited from our ancestors, in the understanding and expression of our faith in God, one in three Persons – Father, Son and Holy Spirit. We are pained by the loss of unity, the outcome of human weakness and of sin, which has occurred despite the priestly prayer of Christ the Saviour: “So that they may all be one, as you, Father, are in me and I in you … so that they may be one, as we are one” (Jn17:21).
6. Mindful of the permanence of many obstacles, it is our hope that our meeting may contribute to the re–establishment of this unity willed by God, for which Christ prayed. May our meeting inspire Christians throughout the world to pray to the Lord with renewed fervor for the full unity of all His disciples. In a world which yearns not only for our words but also for tangible gestures, may this meeting be a sign of hope for all people of goodwill!
7. In our determination to undertake all that is necessary to overcome the historical divergences we have inherited, we wish to combine our efforts to give witness to the Gospel of Christ and to the shared heritage of the Church of the first millennium, responding together to the challenges of the contemporary world. Orthodox and Catholics must learn to give unanimously witness in those spheres in which this is possible and necessary. Human civilization has entered into a period of epochal change. Our Christian conscience and our pastoral responsibility compel us not to remain passive in the face of challenges requiring a shared response.
8. Our gaze must firstly turn to those regions of the world where Christians are victims of persecution. In many countries of the Middle East and North Africa whole families, villages and cities of our brothers and sisters in Christ are being completely exterminated. Their churches are being barbarously ravaged and looted, their sacred objects profaned, their monuments destroyed. It is with pain that we call to mind the situation in Syria, Iraq and other countries of the Middle East, and the massive exodus of Christians from the land in which our faith was first disseminated and in which they have lived since the time of the Apostles, together with other religious
communities.
9. We call upon the international community to act urgently in order to prevent the further expulsion of Christians from the Middle East. In raising our voice in defense of persecuted Christians, we wish to express our compassion for the suffering experienced by the faithful of other religious traditions who have also become victims of civil war, chaos and terrorist violence.
10. Thousands of victims have already been claimed in the violence in Syria and Iraq, which has left many other millions without a home or means of sustenance. We urge the international community to seek an end to the violence and terrorism and, at the same time, to contribute through dialogue to a swift return to civil peace. Large–scale humanitarian aid must be assured to the afflicted populations and to the many refugees seeking safety in neighbouring lands.
We call upon all those whose influence can be brought to bear upon the destiny of those kidnapped, including the Metropolitans of Aleppo, Paul and John Ibrahim, who were taken in April 2013, to make every effort to ensure their prompt liberation.

Type your query in the box below:

Kirill, Patriarch of Moscow and all Russia
Francis, Bishop of Rome, Pope of the Catholic Church

Icon of the Day: